'Danegeld' was conceived in 1957 by David Cheverton for Bobby Lowein, a well-known Cowes sailor with an enviable race record and later Sir Max Aitken's sailing master. Cheverton and Lowein had previously collaborated on an earlier race winner, the slab ended 'Rumrunner'. Lowein's brief was for a 'prettier' boat and 'Danegeld' with her long overhangs, was hailed by the yachting press as one of the ''nicest and most shapely vessels produced in the country'' and ''something of a wonder boat''

In the hands of a master sailor she was fast. In her first full season in 1959, from 22 starts, she gained 15 first places, two seconds and four thirds, or 21 places – ''an outstanding result for a racing – cruiser's first season afloat'' This included winning the Round-the-Island race and her class in the Fastnet.

Her success was ascribed partly to her generous beam of 9' 6''. Commentators said; ''This places her more in line with the normal American cruiser-racer of her size and a remarkably comfortable boat''. The long coachroof with no doghouse helped keep windage low whist maintaining 6' standing headroom below.

Her varnished African Mahogany splined planking is fastened to Oak frames while the deck is 1 3/4'' laid Teak. The coachroof, hatches and coamings are also of Teak. The original design with a wooden mast was too heavy and she was fitted with a Sparlight alloy mast from the outset.

In 1960 members of the Island Sailing Club each paid £1 to freight 'Danegeld' from London to Bermuda to take part in the Bermuda Race. After five days of heavy weather 'Danegeld', the smallest boat in the race finished as second foreign boat on corrected time. 'Danegeld' then sailed in the Transatlantic race to Marstrand in Sweden with RNSA boat 'Belmore'. Crewman and fellow Cowes sailor, Mike Henderson made an 8mm film of the race.

Specification
Hull : Wood
Year : 1959
LOA : 35' 6" (10.8m)
LWL : 24' 0" (7.3m)
Beam : 8' 6" (2.6m)
Draft : 6' 0" (1.8m)
Displacement : 22400lbs
Keel : Long
Rig : Bermudan sloop
Classic boat published this article on Danegeld in may 2013. Click here to read it.
Links
The boats
History
Current boats
Home
Cheverton employees and the Lowein family at the launch of Danegeld.
Cheverton
With Sir Max beckoning, 'Danegeld' was sold in 1964 to George Proctor, she was berthed at Shoreham for ten years and then sold on to Malcolm Farqharson of Poole before being sold again to Clifford Ling of Greenwich in 1979 and berthed in the Hamble River for eighteen years voyaging to France, Spain and The Azores. In 1997 she passed to Robert Veale the present owner and he began an extensive restoration to the racing condition for which 'Danegeld' was famous. The work was carried out at the East Cowes yard of Eddie Richards who was an apprentice at Chevertons yard when 'Danegeld' was built in 1958.

Thirteen years on 'Danegeld's' future is secured. Weight, in the shape of a heavy diesel engine and fuel tanks in the elegant counter with compensating ballast in the bows, has been removed and she is now back to her original waterline. Her sleek hull is as sound as ever and she has a fine new sail wardrobe from Kemps. Berthed in Gosport, she is now perfectly positioned to resume her former distinguished place in the Solent – and perhaps further afield – as a classic racing yacht.

PM (from RV's email)
Nov. 2010.u
This photo was taken at the junction of St James's And High st Newport.
Close 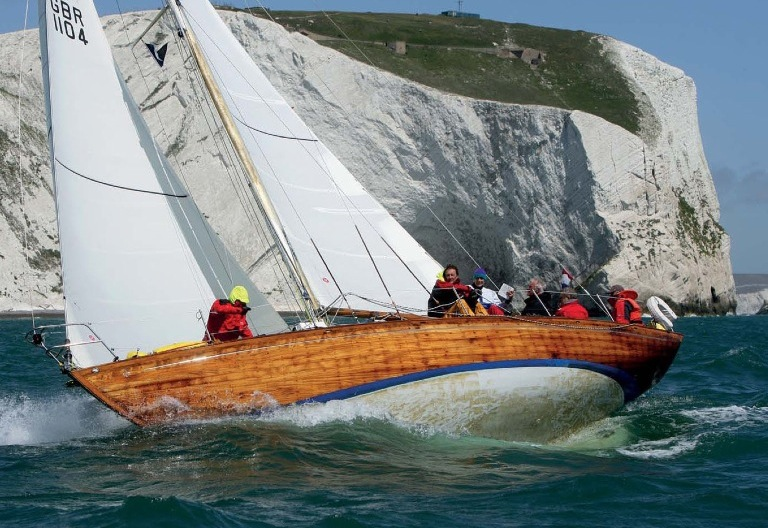 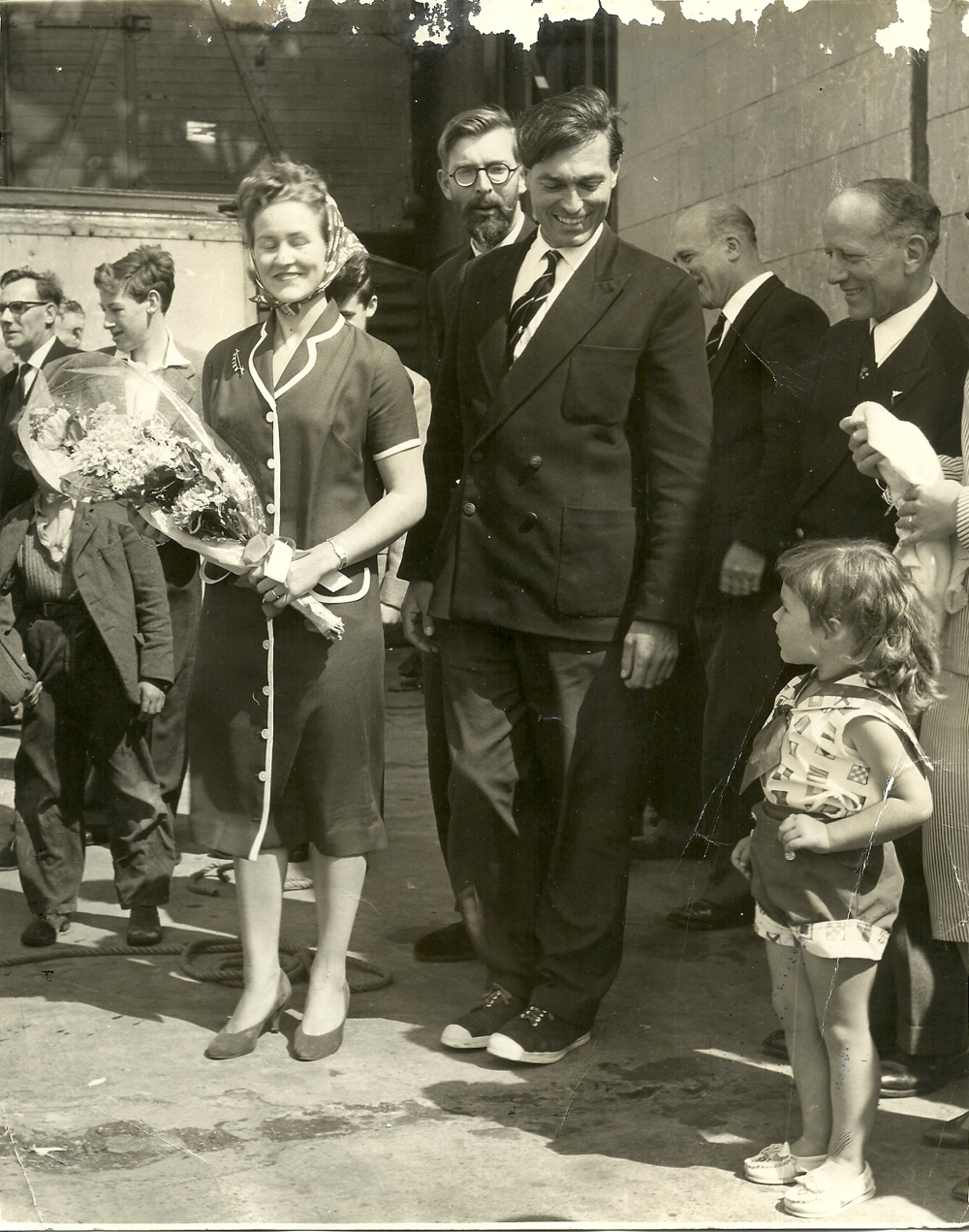 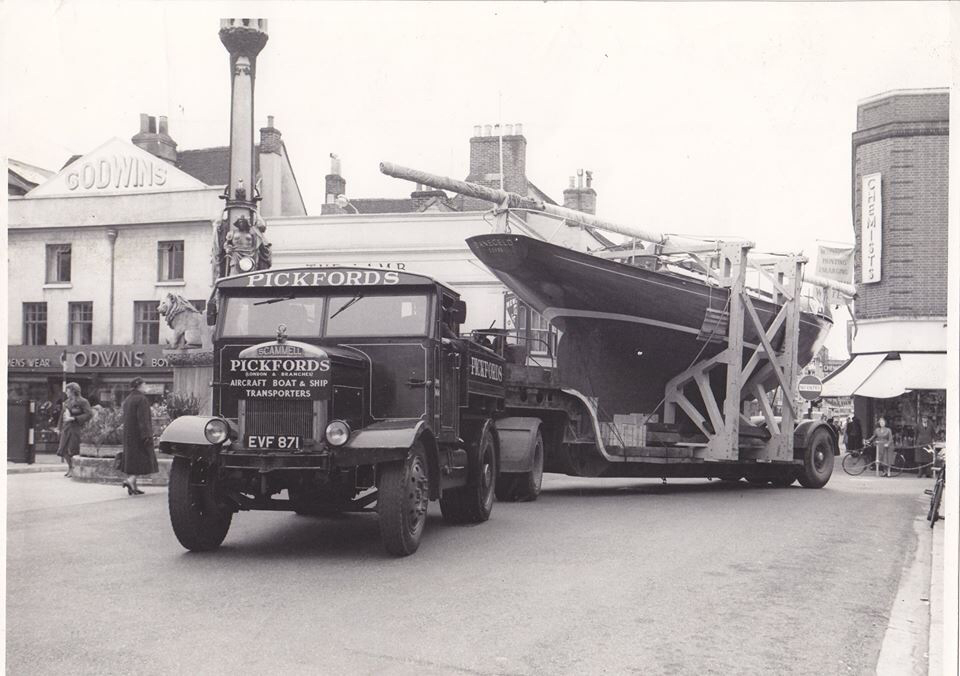